We’re pinning our hopes for this year’s Steel Awards on two of our smaller projects – Neil Woolridge Motors and House Bredin. Both are second-floor extension projects that showcase the functionality of using Light Steel Frame (LSF) as well as the aesthetic flexibility and speed of using LSF, not just for large scale commercial developments but for small-scale residential and business building projects too. Read more about these two projects. 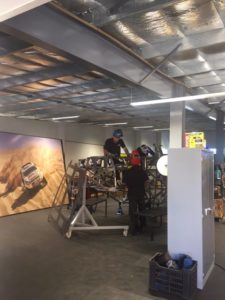 Neil Woolridge Motors
In 2016, a fire swept through Neil Woolridge Motors, on the corner of Chief Albert Lutithuli and Victoria streets in Pietermaritzburg ,damaging a large section of the workshop. At the same time as the workshop was being rebuilt, a second floor extension was included to add even more functional space. Shospec was tasked with the job as Light Steel Frame (LSF) was considered the quickest option as well as being light enough not to put too much pressure on the original structure. The 272m2 LSF extension took us just four months to complete and the finished result has been transformed into a modern, open-plan space that has the look and feel of a museum – with enormous blown up photos depicting a variety of cars in action casually leaning against the walls whilst mechanics wield tools and work on engines – overall an impressive space! 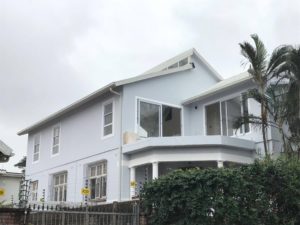 House Bredin
Also a first-floor extension project, House Bredin – an 80-year old house set in an extablished Durban suburb – took just three months to complete and is a perfect example of how LSF can be used to enhance an existing structure in a short space of time – with minimal noise, mess and disruption. The 168m2 exention, including balconies, was light on the old foundations yet strong enough to support a natural stone floor. Not only did using LSF allow us to meet our client’s brief, it also proved to be an intelligent solution to the many challenges that extensions of this nature present without compromising on style and functionality. There’s more to House Bredin than meets the eye – read more for details.